The RUCKUS ICX 7150 family of switches are available in three formats:

Stacking Across the ICX 7150 Family

RUCKUS stacking technology2 makes it possible to stack up to twelve RUCKUS ICX 7150 switches into a single logical switch. This allows the RUCKUS ICX 7150 to deliver a class-leading 480 Gbps of aggregated stacking bandwidth and offer simple and robust expandability for future growth. Stacking is supported across the ICX 7150 family and all ICX 7150 models including the ICX 7150 compact switch and the ICX 7150-48ZP can be mixed within the same stack. This stacked switch has only a single IP address that simplifies management and offers transparent forwarding across up to 600×1 GbE ports or up to 192×2.5 GbE ports, and up to 96×10 GbE ports. When new switches join the stack, they automatically inherit the stack’s existing configuration file, enabling a plug-and-play network expansion. 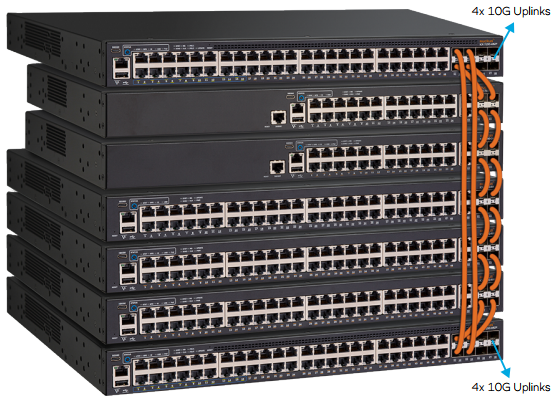 The RUCKUS ICX 7150 Switches help deliver continuous availability to optimize the user experience. RUCKUS stacking technology provides high availability by performing real-time state synchronization across the stack and transferring switch management control from the master stack controller to the standby controller if the master stack controller experiences a failure. When hot-inserting or hot-removing a stack member to increase capacity or perform service upgrade, traffic flows will not experience interruption.

The RUCKUS ICX 7150-48ZP Switch raises the bar for entry-level switches even further with 16x IEEE 802.3bz compliant 2.5 GbE ports, up to 8×10 GbE uplink ports, dual redundant load sharing power supplies and class-leading stacking density with up to 12 switches per stack. It stacks with all other members of the ICX 7150 family allowing organizations to buy what they need now and easily scale as the need for Multigigabit support emerges. It is designed to work seamlessly with RUCKUS wireless access points to deliver unified wired and wireless network access.

All ICX 7150 family members offer PoE options. The compact 12 port switch delivers PoE+ on all ports with a 124W PoE budget. The 24- and 48-port ICX 7150 switches offer up to 740W of PoE+ power and the ICX 7150 Z-Series offers an industry leading 1480W PoE budget when equipped with 2 power supplies. In addition to supporting PoE and PoE+, the RUCKUS ICX 7150 Z-Series also offers Power over HDBaseT (PoH). This new, high power HDBT standard delivers up to 90 watts per port through a standard Ethernet cable, simplifying the wiring of next-generation Ethernet-connected devices such as high-performance wireless APs, large HD displays, video surveillance equipment, and VDI thin terminals, enabling data and power to be carried by a single Ethernet wire. The PoE, PoE+ and PoH capabilities reduce the number of required power receptacles and power adapters while increasing reliability and wiring flexibility.

The RUCKUS ICX 7150 is one of the ICX switch families delivering the enterprise class features for flexibility, scalability and simplified management.

Silent Operation for Deployment in the Work Environment

1 Feature to be supported in a future software release

1 Feature to be supported in a future release.
2 10 Gbps SFP+ ports are required for stacking.

1 Feature to be supported in a future release.

1 With external power supply unit.
2 With QSFP+ to 4 SFP+ splitter cables.
3 To be supported in a future software release.